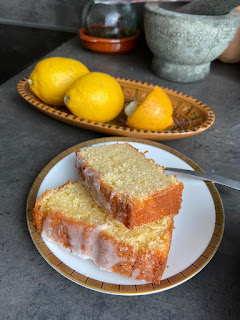 I saw a quote the other day: "You can't buy happiness, but you can buy a cake and that's almost the same thing".
Its true, nothing makes me happier than a big piece of cake! You do not need to buy a cake though, baking your own is more fun and this cake is not difficult to make at all. I made a small video to show you how easy it is!

A little history lesson on the lemon 🍋

Lemons entered Europe near southern Italy no later than the second century AD, during the time of Ancient Rome. However, they were not widely cultivated in this time. The first substantial cultivation of lemons in Europe began in Genoa in the middle of the 15th century. The lemon was later introduced to the Americas in 1493 when Christopher Columbus brought lemon seeds to Hispaniola on his voyages. Spanish conquest throughout the New World helped spread lemon seeds. It was mainly used as an ornamental plant and for medicine. In the 19th century, lemons were increasingly planted in Florida and California.

In 1747, James Lind's experiments on seamen suffering from scurvy involved adding lemon juice to their diets, though vitamin C was not yet known as an important dietary ingredient.

Today we use lemon juice, rind, and peel in a wide variety of foods and drinks. The whole lemon is used to make marmalade, lemon curd and lemon liqueur. Lemon slices and lemon rind are used as a garnish for food and drinks. Lemon zest, the grated outer rind of the fruit, is used to add flavor to baked goods, puddings, rice, and other dishes.

Note: My friend Shannon would like you to know that the cake tastes even better if you add 1 tablespoon of poppy seeds. I have not tried, but I trust her completely 😀 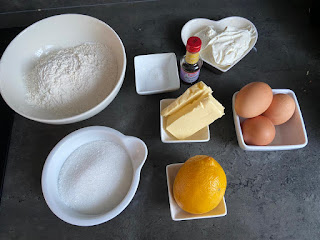 Spray an 8x4-inch loaf pan with baking spray and line with a piece of parchment paper that covers the bottom and long sides, with an inch or so extending past the top of the pan (these will be the "handles" to lift the loaf out of the pan).

In a large bowl with an electric mixer cream the butter with the sugar.  Add the eggs one at a time and beat in well after each addition, scraping down the sides of the bowl, as needed. Beat in the lemon zest, lemon juice and vanilla. Then add the greek yoghurt.

In a separate bowl, whisk together well the flour, salt, baking soda and baking powder. With mixer on low, add the flour mixture to the butter mixture. Scrape into prepared 8x4-inch loaf pan and level batter. Bake in preheated oven for 55-60 minutes, or until a tester inserted in the centre comes out clean.

Allow to cool in the pan for 15 minutes, then run a knife along the short ends and use the parchment paper edges to lift and remove from pan. Allow to cool on a cooling rack.

While loaf is still a little warm, prepare the glaze by stirring together all the glaze ingredients in a small bowl. Wait for the cake to cool, and enjoy!

ps. Let me know what you think of the recipe, and tag us on Instagram if you make it! 💖 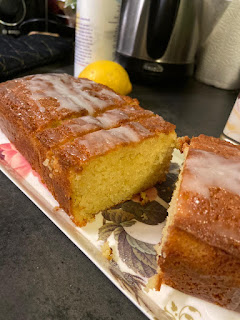 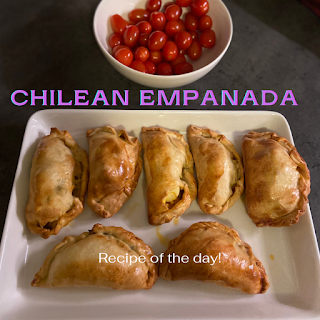 Chilean Empanadas: Meat and  Vegetarian Versions!  As you may know, I am half Dutch and half Chilean. My husband recently said (jokingly): If you really love me, you will make me Chilean Empanadas de pino! In Chile, Empanadas are a staple part of the national cuisine. Commonly consumed in large quantities during the country's national day celebrations. Many Chileans consider this to be their most representative dish. The most common type of Chilean Empanada is the empanada de pino. In the coastal regions of the country, seafood empanadas are also very popular. I decided to make two types of Empanadas: The traditional Chilean Beef Empanada (empanada de pino), and my version of vegetarian Empanadas. I could eat these for breakfast, lunch AND dinner 😀 Traditionally these are served at lunch. Its best to prepare the dough in the afternoon (it only takes about 5-10 minutes) and then leave it in the fridge for when you are ready to start rolling.  Note: you can keep the dough a 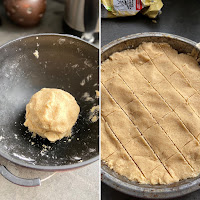 On a rainy cold day in the Netherlands, there is nothing more comforting than a piece of boterkoek. Boterkoek is kind of like a shortbread, a flat round cake that has traditionally been prepared with butter. The cake is usually made in a dish with a diameter of 20-24 centimeters. Traditionally the cake may only bear the name boterkoek when real butter is used.  I have fond memories of eating this at my grandmother's farm, and to be honest - nobody makes this better than my mom. I asked her if I was allowed to share this very secret family recipe... and she did not mind at all. So here you go!  When you get the hang of it, you can make this in 10-15 minutes. Remember to let it cool for at least 45 minutes before cutting it into pieces. Let me know if you tried the recipe, or if you have any questions. We would love to know what you think!  Boterkoek a la Helen Ingredients: 225 grams of flour 200 grams butter 150 grams of white sugar (or brown sugar) 2 tablespoons of milk 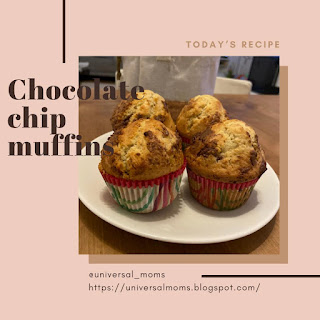 Chocolate Chip Muffin Chocolate Chip Muffin When I was a little younger (ok quite a lot 😊 ) and working in the hotel industry in Hong Kong, I would always go to Pacific Coffee to get my favorite skimmed milk latté and a delicious muffin. Sometimes I would meet my friends there or my mom would come into town to meet me for coffee. I have such wonderful memories of this time. Have you ever found that certain foods can bring you back in time? Well.. when I tasted these muffins, I was transported back to Pacific coffee.  I tried this combination of ingredients last week for the first time and loved the result. I did not actually have any chocolate chips in my house but I did have a huge bar of chocolate and I set my kids to work with a mortar and pestle. It doesn’t really matter if you use actual chips or just pieces of any chocolate you like. I used milk chocolate for this recipe. Hope you love these muffins as much as I do! Ingredients ·          4 cups (550 gr) all purpose flour